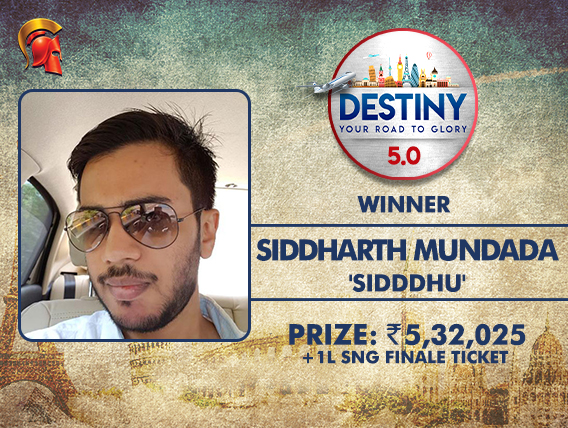 The Destiny Tournament, organized by The Spartan Poker declared Siddharth Mundada as the winner. Through this tournament, he grabbed his second title. Experiencing a series of downfalls, the poker player gave his best performance to enhance his first victory in this tournament, held last December.

The Destiny Tournament continued for more than ten hours and it was an exciting game every single minute for its 477 registered players. In this tournament, the guaranteed prize extended beyond its INR 20 Lakh mark and reached approximately INR 23.85 Lakh. The number 62 was the last playing level when the Blinds were positioned at 44,000/88,000 – 8,800. However, the buy-in was at INR 5,500.

The winner of the tournament, Siddharth Mundada grabbed the top seat with prize money of more than INR 6.32 Lakhs. The rest of the 40 contenders were rewarded with the minimum prize money of INR 14,310 each. Mundada needs to pay INR 1 Lakh from his winnings for the buy-in, during the Destiny SnG Finale. This grand event is expected to take place in the coming weeks. In the event, Mundada would be seen sharing his seat with corresponding Destiny winners.

Discussing his dream run, Mundada chose an aggressive approach right from the Pre-Flop round into the final hand, held against ‘JesusOnAcid.’ The approach was aggressive, because of his chip lead as well. Mundada had 9h As and the latter had 4c Ah. Both these players made a score of a pair of Queens. The deal was then closed for Mundada and on the other hand, his opponent was declared as a runner-up with the prize money higher than INR 3.93 Lakhs. In addition to these two players, other two notable players were Apratim Sharma (‘checm@te’) and Mayank Jaggi (‘AlwayslimpAA’), who completed at the sixth and eighth positions respectively.

After his epic win, when Mundada was asked about his experience and performance, he mentioned that it is always best to ship a contest like this one, particularly when you are passing through a downfall in poker. He added that the last three months were quite annoying for him because he reached the final tables but failed to win them. He dedicated the grand victory to his mother and mentioned that she is the one who allowed him to follow his passion as a passion player.

A great achievement for Siddharth Mundada after passing through quite a few downfalls in the poker game, indeed!