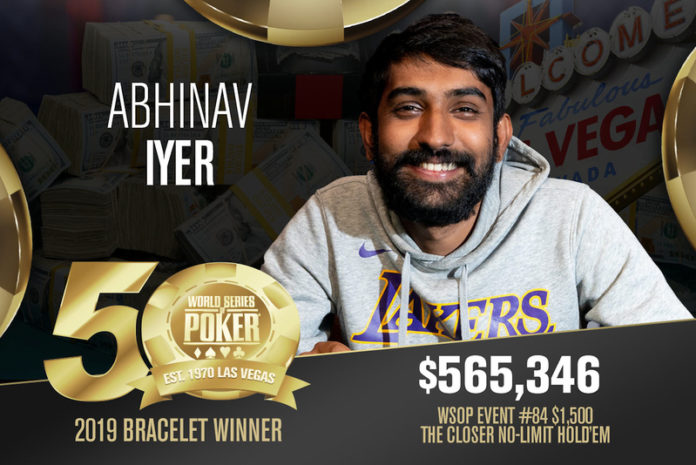 The last day of the 50th World Series of Poker, WSOP 2019, came to an end on the 14th of July with India winning the day. Last year’s coveted Solo Golden Bracelet slimly eluded our runner up, Paawan Bansal. However, this year’s title was bestowed to our own Abhinav Iyer; who emerged the overall winner of the tournament, and in turn setting a new high score record by an Indian at $565, 346.

Before snatching the solo golden bracelet, Iyer had gone through stiff competition-beating up some big names to emerge top of the 28,000 entrants. Notable names like Jason Reels and Sammy Lafleur suffered under his hands in the last rounds of The Closer final 9-handed table after entering the event with 15.7 Million chips.

Iyer’s lucky star started shining brighter this year after he won the 2019 Asia Poker Tour (APT) Main event in Vietnam. His performance had been brilliant in WSOP events before The Closer finals.

Iyer praised the continuous development of poker in India over the years in the after-event interview. He says, “Now more and more people are getting into poker. It’s growing, and I hope this [win] can enhance that growth.”

Furthermore, he could not hide his love and appreciation to the Indian fans and participants at the event “The Indian rail was pretty great … I feel really proud.” He has no plans of spending his winnings as of now.

India was also represented in other competitions. Before the final event, six Indians who had cashed-in were knocked out, leaving only Iyer in the finals. Siddhart Mudanda, a fresher, surprised many by emerging 73rd, with $5,956,  a few positions shy from the finals. Kalyan Chakravarthy also had an impressive run in The Closer, becoming 98th at $4,401.