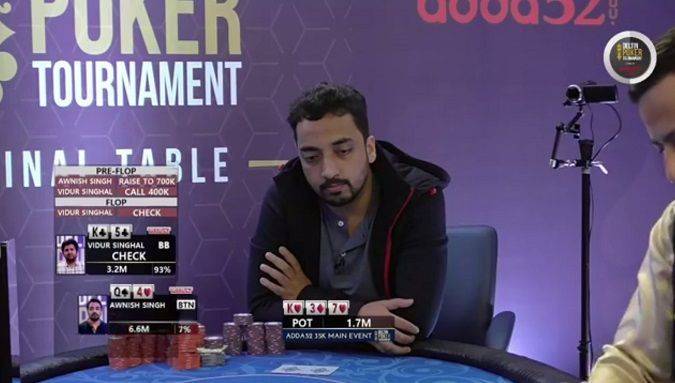 The 2018 Deltin Poker Tournament ended on 29th July 2018 with its Main Event. Participants belonging from different parts of India appeared in this tournament. Presently the tournament of July edition is over and it witnessed a booming success. It was actually a kind of four-event series which was organized onboard Casino Deltin Royale in Goa.

The title holders of the initial three events were PokerBaazi Team Mentor Jasven Saigal, Baadshah Team Pro Eka Vedantham, and Abhishek Tibrewal. Out of the 457 participants, the DPT Main Event got it champion during the concluding day of the tournament.

The event witnessed the massive entries across the three different starting flights. These were 80 entries from Day 1A, 153 entries from Day 1B and ultimately a huge field of 225 entries were noted on Day 1C. It is found that the topmost 49 places were guaranteed a min-cash of ₹70,000, whereas ₹35.04 Lakhs is allocated for the champion.

It was quite expected that the game would be composed of hurdles. However, overcoming every obstacle and getting the win in the gigantic field was none other than Awnish Singh. He is comparatively lesser known personality within the Indian poker community but after this victory, he would be in limelight. The winner was up against few popular names like Sailesh Lohia and Bhuvan Bansal, performing on the final table.

Singh commenced the final table with fourth biggest chip stack but his stack of 905,000 was actually behind the chip leader Ankur Sehgal who commenced with his stack of 2,910,000. During the initial stages of the final table, he held back but he slowly showed his violent side as the game progressed. He made entry into the heads-up play following Vidur Singhal; however, he succeeded to make his way to the top position to grab the title as well as the eye-catching prize of ₹35.04 Lakhs.

Looking at the recap of the Final Table, whole activities of the event were live streamed. Its elimination began with Raunak Modi who was censured by Rugal Advani, obtaining the ninth place. After him, Mukunda Dasharath and Gautam Raju left the felt at the eighth and ninth place respectively. It is found that the sixth and fifth elimination took place back to back with Rugal Advani and Ankur Sehgal respectively.

This type of swift elimination boosted the level of pressure on the players. Vidur Singhal crashed Lohia at the fourth position; hence it unlocked a three-way game. The elimination of Bhuvan Bansal in the third place directed a Heads-Up finish between Singhal and Singh. It came to know that Singh took great time to grab the title with the twisting end. Moreover, Singh’s flush presented him the title of champion.