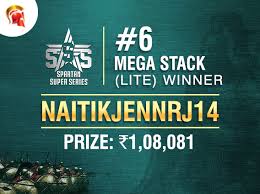 The second day of action of the Spartan Super Series at The Spartan Poker is just completed and there are five more events to take place at the end of Day 2. The cash of more than 3.7 Crores and prizes are to be offered for participating players so this is the prime reason why the competition is strong. At Spartan, Tuesday is recognized as Mega Stack day and the ‘Lite’ version of this prestigious daily featured tournament initiated the day’s action. In the opening event of SSS Day 2, there was a poker player -‘NaitikJennRj14’ who outlasted the field. He succeeded to win the title and take home the whopping prize money.

There were 356 entries in this INR 1,000 buy-in re-entry tournament with a guaranteed prize pool of INR 4 Lakhs which is expected to reach up to INR 5,84,220. Huge numbers of payouts were anticipated and every poker player was guaranteed a min-cash of INR 2,628. The game continued for 7 hours, the field transformed to the final table and after that, there were three players remaining to grab the enormous prize money. ‘johnny89’ was compelled to exit by ‘zeeke’ (6d 6c) because his 8h Ac was incapable to hit the board of 3c Kh Qc 4c 5s. This indirectly implies that zeeke would face NaitikJennRj14 for attaining the title.

Though zeeke succeeded to win the knockout pot against johnny89, his stack was still lagging to that of NaitikJennRj14. zeeke’s stack was 3.9 million whereas that of NaitikJennRj14 was 5.6 million chips. This cannot be considered as a major drawback because the difference can be compensated by only one hand and it may change the things around in poker.

There were few pots being traded to and fro before zeeke finally accomplished to score a million chip pot against his challenger to reduce the stack gap slightly. In spite of continuous efforts of zeeke, NaitikJennRj14 still own a million chip advantages whilst the final hand took place. The blinds were running at 48,000-96,000-9,600, and NaitikJennRj14 (Jh 9h) lifted it to 144k. On the other hand, zeeke (Ts 2d) made it certain to test the chip leader with a profound lift to 480,000. NaitikJennRj14 decided to see a flop of 9s Ad Kc.

The game showed twist when zeeke sustained to rep a strong hand by shooting out 585k which was leveled again by NaitikJennRj14. The latter had caught a piece of the flop through his bottom pair. There was another big card in Qc on the turn; however, the board has no become extremely scary for both of them and it went check-check. The river card 9c presented NaitikJennRj14 with a set of Nines and this was an auspicious moment for him when zeeke made a call to pass off at the pot by going all-in.

When the cards opened, zeeke acknowledged the bad news regarding his elimination. Finally, the opening event of SSS Day 2 declared its first winner of the day -NaitikJennRj14 who bagged a whopping prize money of INR 1,08,080. This was his first SSS title of the series. On the other hand, zeeke was declared as the runner-up with prize money of INR 77,993.

A commendable victory for ‘NaitikJennRj14’ in the SSS Day 2 event packed with strong competition, indeed!