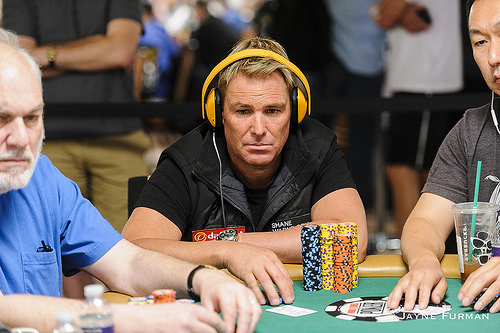 Shane Warne, the Aussie legend cricketer, and a part-time poker player has always been upfront in speaking out his mind. He questioned the Indian Government as to what is holding it back to make gambling legal in India.

The Australian Champion spoke to the Times of India in an exclusive interview. When asked his views on the legalization of gambling in India, he bluntly said that “The government of India is clearly missing the trick here”, Warne told the Times. “They should have legalized gambling a long time back.”

Well for those you don’t know, gambling isn’t completely illegal in India, but as a matter of fact is governed on a state-by-state basis similar to the United States. 13 states have their own lottery, while just two i.e. Goa and Sikkim – have started to allow some forms of gaming, including online poker, even though there are some grey areas in these two, which is open to legal interpretation.

This being said, Shan Warne who has $137,258 in live tournament poker earnings with best-ever cash of $35,899 in the 2018 Aussie Millions, is persistently conveying that the Indian Government needs to be caught up with today’s times. He believes that “If someone wants to gamble, then it doesn’t matter whether you legalize it or not; they’ll still do it, so (they) might as well benefit from it.”

Even though gambling is restricted in India, there is one big exception to the Public Gambling Act in India which states that “Nothing in this Act shall apply to games of mere skill,” thus opening the doors for poker. Poker being a skill game has shown major progress especially in the areas of Online Poker. Delta Corp, one of the country’s longest-running poker and gaming sites, attracted high-stakes legend Patrick Antonius for their 10th-anniversary promo event last year

After a successful World Poker Tour stop at the Deltin Royale Casino in Goa in 2017, the WPT came back to India for a second event in November of 2018, hence making considerable progress in Live Tournaments too.

This being said, the majority of the online sites have focused their attention on Female Poker Ambassadors to gain attention and also as a way to grow their brand.

Poker Business is on a verge of booming so catch up some great articles on this topic here and stay tuned for more..!!