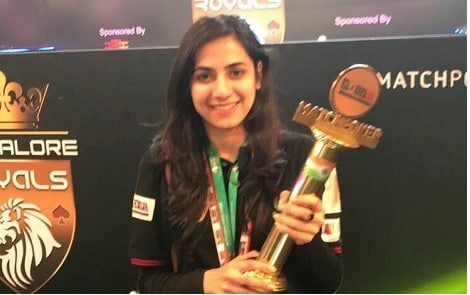 Our Wonder Women have once again proven that gone are the days of lagging one step behind. Several beautiful, resilient women have showcased what it’s like to walk with their head held high and make a mark for themselves across various professions and make the country proud, and Poker being no exception. The skill game is no longer considered a taboo and is played professionally across age, gender, race or location. The women poker players are on par with their male counterparts refining their skills, strategies and competing among the best on both national and international platforms.

Under the spotlight after her latest performance is Pratibha Arya, one of the India’s rising female poker stars , who turned her life around once she was introduced to the mind sport by a few of her friends.

Pratibha, who hails from New Delhi holds a degree in Computer Science but her passion and love towards the game soon made her pursue Poker fulltime even after being placed in a reputed IT firm.

The first ever live Poker tournament she played was in 2015 at Goa where she managed to be a part of the final 6 players and eventually cashing out a sum of    Rs 65,000. Post this score, Pratibha started delving into the game with each passing day and hence trying to master various aspects of the game by watching a lot of professional videos and seeking inspiration from top notch professional poker players.

“It’s all about skills, math, probability, and practice, with minimum luck involved. Poker is not a gamble since we have plenty of familiar faces winning consistently. I spend around 9-12 hours playing and honing my skills every day” explains Pratibha.

And as we say that hard works pays off well, Pratibha soon went ahead to represent India at the Poker Nations Cup in Oxford and the IFMP Asian Nations Cup in Bangkok and was also fortunate enough to be one amongst  the two Indian players privileged to play against the latest Artificial Intelligence computer bot – Deepstack, in Bangkok.

She recently became the talk amongst the community when she finished 10th in the GAME CHANGER – 2Cr GTD, organized by Pokerbaazi which also went down in the books as India’s biggest online poker tournament, witnessing a gigantic field of 3777 players.

The success story clearly depicts that Pratibha Arya is a female icon of the Indian Poker industry who motivates many lady poker players to improve their skills and don’t be afraid to conquer the male-dominated game.