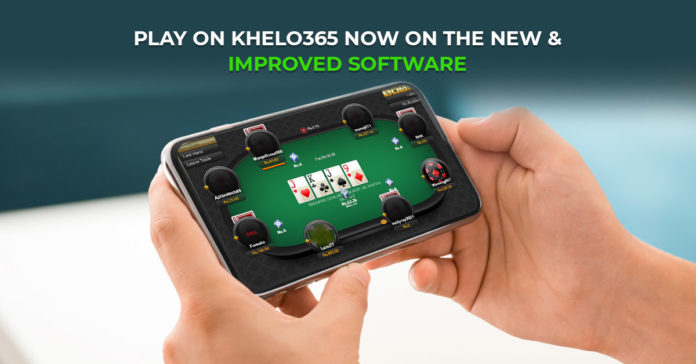 Khelo365 is a legend in the Thai poker community. They were the first to get the Nagaland Gaming License back in late 2016, and since then they have been only upping the ante. Even if you haven’t been following the news of online poker in Thailand, you must have heard about luxurious and even decadent VIP parties that Khelo365 throws for their most loyal players! After all, their last three-days-long getaway in Pattaya — called Never Say Never Again — involved scuba-diving, go-karting, grand buffet and partying with models.

And yet, lately, the company has been lying low, with no apparent plans for the future. Some players speculated that they have been working on something big, but that was nothing more than a rumor. Apparently, they were right — Khelo365 has just announced a total revamp of the platform, bringing digital online poker into a completely new era.

Khelo365 has always been working on improving the player experience. However, you can only polish the old code to an extent. Eventually, the team decided to build a new platform, and use this revamp to implement many ideas the community has given them. And now, it’s finally ready.

The update is already available in the browser instant-play version, as well as Windows, iOS, and Android clients. The mobile versions also received an option to switch between portrait and landscape mode to improve usability.

A New Direction for Khelo365

With the platform being taken care of, Khelo365 has also been looking for ways to further improve the quality of the service they offer to the Thai players. And now, the team is proud to announce a partnership with Connective Games, the provider behind the current industry leader — Spartan Poker.

Connective Games are an experienced developer company with over a decade of experience in building social gaming, casino, and online poker platforms. They also happen to own the third largest liquidity network in the world and are in the running for the International Gaming Awards 2020. To put it mildly, we are very excited for whatever this partnership will bring in the future.

During the announcement of the new platform, Anand Kapur, Vice-President of Marketing at Khelo365, said, “I believe that poker is something more than a mere game of chance. It’s a skill-based sport that challenges mathematical skills and the ability to read other players. You need awareness, perception, and quick wit to succeed in poker and I dream of a world where it is seen as a self-improvement game it really is!”

“If you are interested in bettering yourself in a competitive environment, check out our new client! We worked hard to implement the best gaming features and make it a standout on the online poker market. I’m sure that you are going to love it and stay with us! Also, if you have any ideas for its improvement — tell us, and we will make it even better for you! Welcome to the new Khelo365!”

Freeroll Poker Tournaments ₹18 Lakhs – Free-to-play day-long tournaments that launch every three hours and give an opportunity to win up to ₹18 Lakhs every month.

Daily Depositor Freeroll ₹40,000 GTD – A special “Daily Depositors Epic ₹40K Freeroll”. The tournaments will take place daily at 10 PM, and in order to get a ticket, you need to make a deposit of ₹200 or more.

You can also get a First Deposit Bonus — 10% instantly and an additional 190% as a Locked Bonus. All participants in this program will also receive a free ticket to the Daily Depositors ₹40K GTD Freeroll tournament and another ticket to a different GTD event.