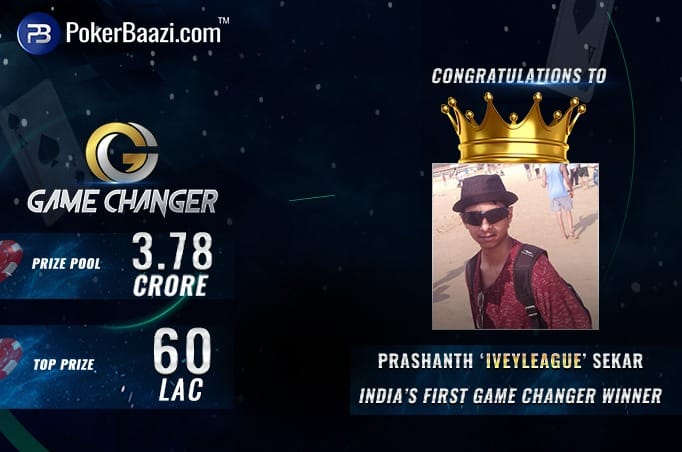 “Game Changer”: India’s Biggest Online Tournament was organized by India’s leading and one of the trusted online Poker platform, PokerBaazi. Indian Poker players competed against each other for 4 days for every player wanting to win big. There were a total of 377 entries for the game.

February 24th, 2019, was a historic day for India Poker as the Game Changer crowned the crowned its inaugural champion. Prashanth (Iveyleague) Sekar was the one who bagged the title of India’s first Game Changer Champion.

The Founder and CEO of PokerBaazi, Mr.Navkiran Singh congratulated the winner and said, “I am proud to say that Prashanth (Iveyleague)  Sekar helped PokerBaazi create history by winning Game Changer. I wish him luck for all his future tournaments. Game Changer has been a testament to the skill and ingenuity and has lived up to the vision of its creators in every way possible.”

Bangalore-based Sekar was ecstatic about this win, and stated, “It is unbelievable that I won India’s biggest Poker tournament organized by PokerBaazi. When the Game Changer was announced, I was sure to participate and knew that it would be a dream come true to win this one. After winning it, no words can do justice to how I feel!”

This was the gist of the overall Game Changer event. For more such blogs, click here