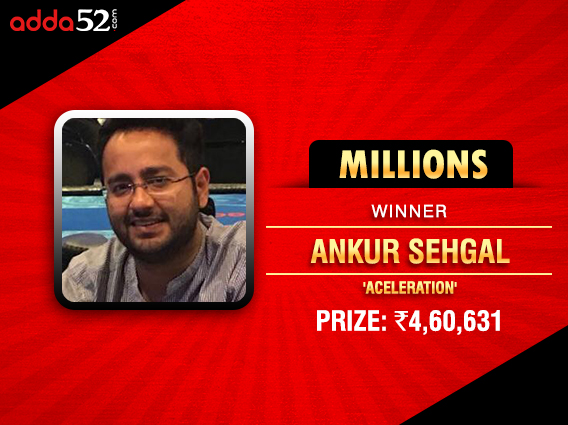 The last Sunday was a super Sunday on the famous website Adda52. It was a day of its trademark tournament 20 Lac GTD Adda52 Millions. The 11 K buy-in tournament highlighted 50% TDS payment for all items carried a result of 164 listings. Surviving the court this season was Ankur Sehgal aka ‘Aceleration’. He was the player who emerged as a champion and took home an exceptional value of INR 4,60,631 in the 6-max poker game.

Ankur Sehgal entered the heads-up along with Anant Purohit also known as Pro_baba. Pro baba lately won The Whale and came out bagging the fifth position in Blaze and fourth in the Gayle Storm on India’s famous poker site adda52.com.  In these two matches, the runners-up finished for INR 4, 19,369 and Sehgal emerged as the winner.  Consequently, the runner-up score was the best score on the website.

Upon winning the tournament, Ankur Sehgal said, it was a strong field to tackle and defeated the high rollers master Sriharsha Doddapaneni. She came 4th and took the prize money of 1,85,000, along with her there were other position holders like Pranav Bagai who bagged the 5th spot and received prize money of 1,35,000 and Abhishek Goindi, who is the Punjab Bluffer mentor bagged the 6th position for INR 95,000. All of them won the Chip Up Series Main Event on Adda52.com.

The entire tournament witnessed 17 players who took cash home starting from 30,000 rupees. However, there were some well-known regs who made money in the tournament are Nagendra Singh who is also known as gameank123 as he was placed at the 7th position receiving INR 75,000 and Abhinav Iyer who took the 11th position with INR 40,000.

Sehgal’s journey was one of the bets in the website by far. This was not his first win as he has already played and won The Whale 6-Max, making it to the final table 3 times both in Mega suit and Roar. Moreover, he has drawn over various other famous competitions, including PayCheck, Sunday Suits, Adda52 Millions, and Godfather.