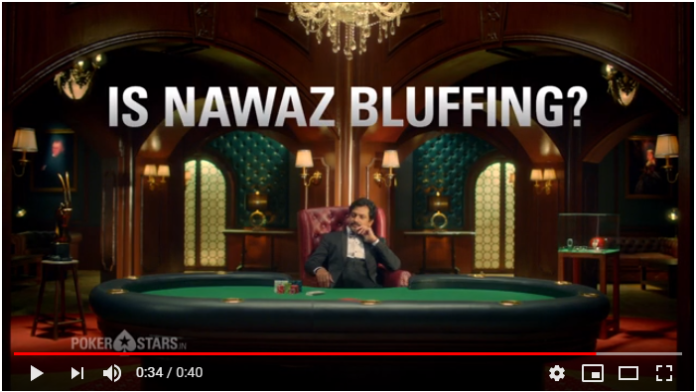 India’s first ever Poker TV Commercial was launched recently by PokerStars India. PokerStars India which is operated by Sachiko Gaming also announced its first Brand Ambassador to be the Bollywood actor Nawazuddin Siddique. He is the one who stars in the commercial for the brand too. This association is made to strengthen and widen the range of the concept of Poker to the audience as well as to reach out the brand name.

The commercials have been shot for 3 different scenarios with a different narrative for each of them. The first features Nawazuddin trying to use a poker chip as everyday money, one commercial is showcasing him in a role inspired by James Bond and the last commercial is about him analyzing the various characters and behaviors of people in a cafe. Thus the commercials very smartly showcase various different skills a poker player needs to have in order to win. These skills include body language and poker table etiquettes.

And the very end of each commercial viewer is encouraged to vote for the question of whether “Nawaz was bluffing or no?”, For a chance to win prizes. Those who vote will receive tickets to free poker tournaments of more than 0.5 million GTD and guaranteed prizes. These prizes can vary from cashes to high-end tech gadgets such as Smart TVs, Smartphones, wireless headphones, Power Bank charges, and Smart speakers. The free tournaments take place every Sunday from 8 to 24 March at PokerStars official website.

“We are delighted to partner with Nawaz for this ground-breaking TV advert. Nawaz is one of the most engaging and, popular and personalities in Bollywood who has shown great resilience, determination, and skill to get to where he is today. These are all key attributes belonging to poker players and PokerStars India so we could not have partnered with anyone better. I look forward to working with him on many successful projects in the future,” said Sachiko Gaming CEO Ankur Dewani.

The concept of bluffing in real life and engaging the audience through fun and narrative designing was produced by creative agency Ogilvy. This advert not only focused on entertainment but also encouraging people to work out the answer to the question of Nawazuddins actual bluff and trying to get as many votes as possible. This way the viewers will also eventually try their hands at the game themselves.

“It’s a great pleasure to be associated with PokerStars India”, said Siddiqui, “I have been intrigued by poker for some time now as I believe it hits the magic balance between being easy to learn yet gives ongoing opportunities to increase your knowledge and master the game. PokerStars is one of the most popular and trusted poker brands in the world thanks to its wide range of tournaments and games, excellent 24/7 customer support, top-level security and award-winning software. I am looking forward to improving my poker skills alongside some of the best professional poker players at PokerStars India.”

PokerStars-sponsored Global Poker League (GLP) India will be aired soon. The first show to be aired on 9th March on Colour Infinity Channel. Two 22-minute episodes will be shown once a week with the final broadcast on 30 March. Six teams from across the country will play poker and compete to win 10 million and to be named Champion. Prop Poker players like Aditya Agarwal and Muskan Sethi are both sponsored by PokerStars India. They will repwresnt as captains of two teams, the Kolkata Creators and the Delhi Diehards respectively. Each team shall consist of a team captain, 2 experienced players, high-level poker players and 2 players who are qualified from the online PokerStars India game.

Stay tuned to know what happens next..!! Read our other articles here