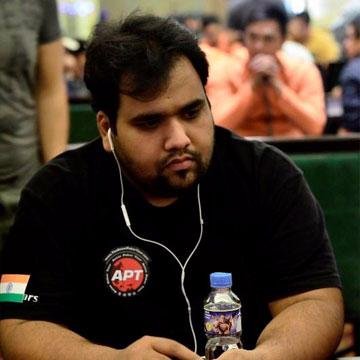 For the majority of Indian poker players, the 2018 Asia Pacific Poker Tour (APPT) is certainly one of the preferred grounds. This can be justified by several significant runs that Team India recorded at the series, until now. The spectacular runs were made by Akshay Nasa (secured 2nd place for ₹36.67 Lakhs in National), Jasven Saigal (secured 8th place for ₹1.40 Lakhs in Turbo Megastack) and Chiraag Patel (secured 1st place for ₹4.54 Lakhs in NLH Turbo). Following these runs, in the ₱200,000 High Roller event, the stellar runs were made by Sahil Agarwal and Sriharsha Doddapaneni.

Poker player -Doddapaneni completed at the ninth position and he was rewarded with ₱553,000 (₹7.20 Lakhs). However, the one who grabbed everyone’s attention and made the headline was none other than Agarwal, who performed outstandingly to reach the heads-up play against ultimate champion -Ivan Hon Cheong Lee. Agarwal could not complete at the first place, but his remarkable performance let him complete as the runner-up for ₱4,656,260 (₹60.65 Lakhs). Currently, his score is the greatest score by an Indian poker player at the series.

Discussing how the play unfolded, Doddapaneni and Agarwal made it to Day 2 and they were joined by players like Rathi Shashank, Kavin Shah, and Aditya Sushant from Day 1. Shashank, Shah, and Sushant could not bag any prize money, Agarwal and Doddapaneni proceeded to the final table. The champion of the event -Ivan Hon Cheong Lee attained a top position in the field consisting of 124 entries to secure his maiden APPT title as well as career-best cash of ₱4,676,260 (₹60.91 Lakhs).

The ₱200,000 High Roller’s field consisting of 124 runners has beaten the record of 82 poker players that participated in 2018 APPT Korea. These 82 players also set a new record for the APPT Manila edition, the event which made the best attendance record of 58 entries, in 2016. The massive prize pool of ₱22,131,520 (₹2,88,30,117) was due to the present player pool. There were total 90 unique entries, but only the first 17 entries were rewarded with prize money.

The Indian poker player – Aditya Sushant felt on the money bubble and he was railed by the runner-up finisher –Agarwal. The ace-jack by Agarwal surpassed the pocket nines by Sushant when the former smashed a pair of jacks, which made Sushant go to the rail.