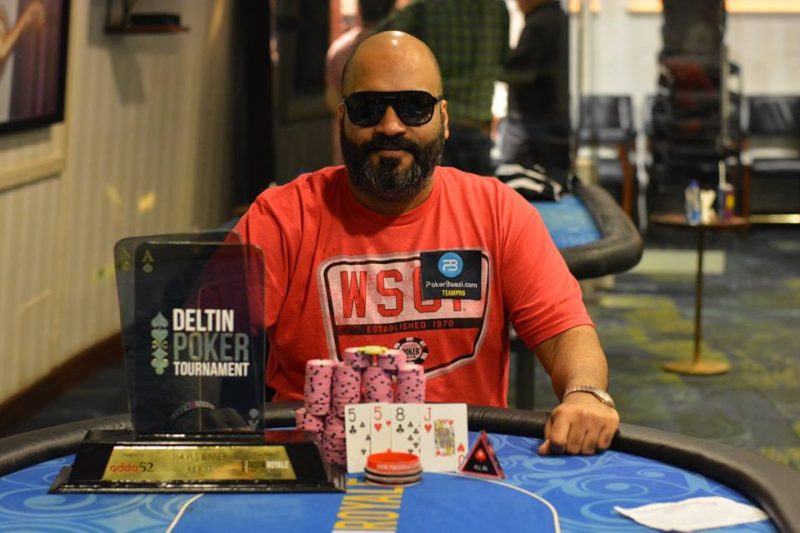 At the inaugural event of the Deltin Poker Tournament (DPT) – July edition in Goa, the ambiance was packed with cheer and excitement at Casino Deltin Royale. The reason behind the high-level of excitement was ₹15K Deep Dive NLH continued with its 16 final runners. The play continued for many hours after which the team mentor of PokerBaazi, Jasven Saigal came out to be the winner and grabbed the trophy.

This summer, Saigal failed to succeed at the WSOP in Las Vegas. This was the reason why the Deep Dive trophy was the critical boost he required to recover the defeat faced against the poker legend Phil Ivey. During the WSOP Main Event Day 2C, the elimination of Saigal was lead by Ivey’s flush in the turn. The result of being declared as a runner-up motivated Saigal to perform well in the Deltin Poker Tournament (DPT) July edition. The motivation thus converted into his huge victory.

During the 15K Deep Dive, it was found that Saigal started powerfully since the start. The poker mentor made entry into Day 2 with the second maximum chip count, being a runner-up after Adithiyya SB. To make headway through the final table now did not appear to be a tough game for him.

During the heads-up play, the PokerBaazi Pro competed against Baadshah Team Pro Eka Vedantham with the objective to attain the great prize money worth ₹10.77 Lakh including the trophy. Eka Vedantham, the Baadshah Team Pro as well as the mentor for the corresponding Pro-Hunt mentorship program, is regarded as a regular at the Goa tournaments. The mentor failed to grab his maiden tournament title; however, he finished second, claiming the prize money worth ₹ 7.14 Lakh.

In the tournament, 326 players participated and this includes 269 unique entries as well as 57 re-entries. The top 26 places were rewarded for their performance with a min-cash of ₹30,000.

The money bubble exploded on Deepak Singh at the instant when his pocket jacks collapsed against Raj Ramakrishnan’s rivered straight. During the later phase of the tournament, GPL India Mumbai Jetsetters Team Manager Kavin Shah and Deepak Tulani faced elimination in a single hand by getting the 17th and 18th place respectively, and both of them were rewarded with ₹47,000.