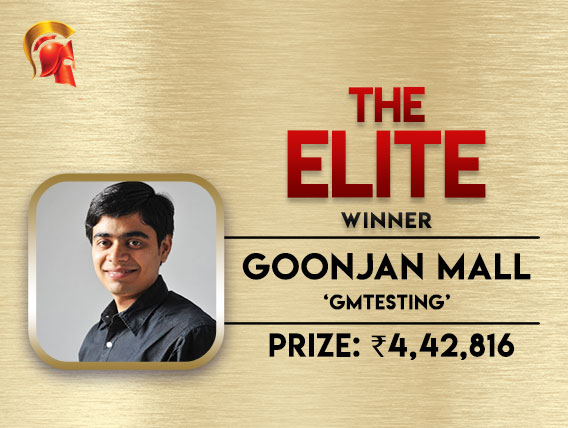 The Elite tournament commenced at 7:30pm IST on Friday of last week, and it was a long grind for poker players who progressed till the end. This tournament finished in Level #44, with the blinds noted at 21,000/42,000 – 5,250. The final hand ended on Saturday, last week, concluding a tournament which lasted almost 8 hours. There were 176 entries which generated a whopping prize pool of INR 17.6 lakh.

A few days back, well-known poker player – Ratul Steves grabbed a win in the Destiny tournament on Spartan. He received more than INR 5 lakh along with a ticket to the Destiny SnG finale. In the Spartan’s Elite tournament he performed brilliantly which allowed him to attain rank in the top positions.

Goonjan Mall was up against Steves in heads-up and the former attained a healthy chip lead prior the occurrence of the final hand. Steves then made it certain to go all-in pre-flop with 6h 7h as well as the hope of hitting a flush. On the other hand, Mall would have been pleased to call with Ks Qc.

The community cards showed up Jd 3h 8d 8h 3s and there were no players who could improve their existing hands. Steve and Mall both hit two pairs – Eights and Threes; however, Mall took down the pot and the title, attaining a whopping prize of INR 4,42,816. On the other hand, Steves was also rewarded with a notable prize money, i.e., INR 2,99,200.

Goonjan Mall is the Founder & CEO at OnlinePrasad.com, and after this gigantic victory in the tournament, he was being interviewed. When asked to share his experience, he discussed his introduction to poker, and how he played small stakes with friends at BITS Pilani. Later, he was introduced to the poker game by playing on Zynga before getting serious in the game. Initially, he worked on low stakes, gradually worked on the medium and presently, he accomplished to ship The Elite.

The overall experience of playing the tournament was quite good for him. He mentioned that it was essentially a tough field and the key to his motivation for playing in the game against good competitors. ‘TheInternetKid’ (Kartik Ved) was one of the tough players and Mall was capable to win a critical shoot against him which allowed him to take the chip lead. Apart from Kartik Ved, he faced tough competition against a player on the Final Table, ‘Lone Believer’.
Throughout his poker career, Mall has played lots of live events, held in Goa, Manila and many other venues. He has no immediate plans of participating in live poker tournaments and he plays poker recreationally. He might play the World Poker Tour’s second tournament series to be held in India during the latter part of this year.