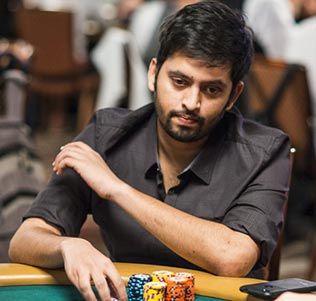 India was well-represented among players who earned a payday at the 2017 WSOP Main Event as four Indians earned a trip to the cashier cage at the Rio All Suite Hotel & Casino.

Falling just short of the top 100 finishers in 102nd place was Rahul Byrraju, who took home a prize of $53,247. It was the largest cash in a WSOP event in Byrraju’s career and the third largest including live tournament action from around the world.

The recent $10K Main Event cash was the 7th time that Byrraju landed in the money in WSOP action. The $53K in prize money pushed him up to 6th place on India’s all-time money list.

A live tournament poker career that began in 2015 with a couple of final table finishes at the India Poker Championship in Panjim has transitioned 14,185 kilometres to Las Vegas, Nevada for Paawan Bansal and the Meerut native made the most of it by finishing 124th in the world’s most celebrated poker tournament.

Bansal earned the same amount of prize money ($53,247) as fellow Indian Byrraju, but unlike Rahul, it was the largest cash of his career. The Main Event payday was the second in the money finish for Bansal at the summer poker festival after landing 74th in $1,000 NLHE (Event #37) for $3,171.

Paawan nearly doubled his lifetime earnings with his performance in the Main Event. His live career cashes now total $125,418.

It appears that Kavin Shah is beginning to get the hang of navigating his way through large tournament fields to land in the money. His first WSOP cash in a field of more than 6,900 players came in 2016 in the $1,500 Monster Stack where he finished 313th to earn $4,872.

Shah followed that up this year in the 7,221-player Main Event by making it to 446th place before getting KO’d. His efforts were worth $27,743, almost tripling the entry fee and putting his career live cash tally at $60,782.

The last of the Indian players to turn a profit at the Main Event was Sumit Asrani. Finishing 739th, Asrani was far from the bubble that burst at the 1,084th position and paid $15,000.

That victory remains as Asrani’s crowning achievement in live poker. But there is no doubt that his cash in the 2017 WSOP Main Event was thrilling as well.