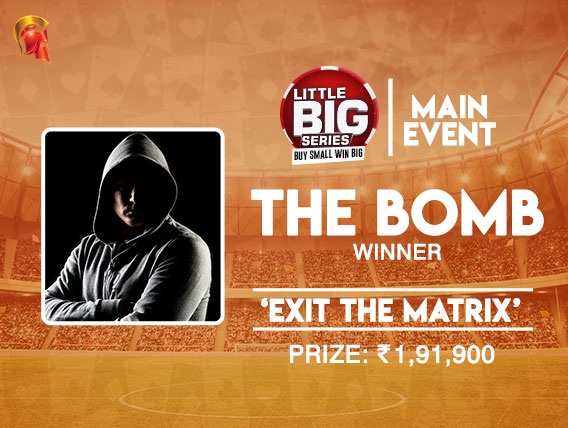 The Mega Stack event proceeded into its middle stages in the current Spartan Super Series at The Spartan Poker, but the last event of the day – Event #10 commenced at 10:00 pm. The event features a seven-figure guaranteed prize worth INR 10 Lakhs. At 5:00 am on the auspicious occasion of Independence Day, ‘Exit the Matrix’ commemorated the beginning of this big day and ended with a title win.

There were total 313 entries who elevated the prize pool up to INR 11,20,000. Out of these entries, the first 39 finishers would bag the prize money. The amount worth INR 7,728 was guaranteed to money finishers but the key attention of the event was the top 3 finishers which conveyed the largest share of the amassed prize pool. In this tournament, the interesting thing to note is that Ankit Wadhawan a.k.a ‘d00mtr00p3r’ and its runner-up ‘indiapro’ too bagged the prize money, finishing at the 17th and 18th respectively. The names of other poker players who performed notably were Sam ‘Lokimon’ Anand (completed at the seventh place) and Anurag ‘InvestmentBanker’ Srivastava (past winner of this Mega Stack event).

The final phase of the event witnessed two players who continued the battle severely for the title and took home the biggest prizes. They were ‘100dagar’, who won 2.1 million and Exit the Matrix, who won 3.4 million. During the upcoming 10 odd hands, Exit The Matrix lost his lead, and he and ‘100dagar’ both were at similar stacks while a big hand and pot went down. By means of the blinds at 15,500-31,000-3,100, it was Exit the Matrix who choose an outstanding starting hand in pocket Kings (Kd Kh) and noted a lift to 46,500.

‘100dagar’ noted a commendable starting hand for heads-up and lifted it to 217,000 and the same got 4-bet to 558,000. Now ‘100dagar’ made it certain to even the bet to perceive a flop of Tc 3d 4d. Top kicker and top pair suggested that he was convenient to place his chips into the middle. However, he came across the bad news when his challenger’s Kings opened up. He does not have any Ace or Ten on the remaining street and this implied that a whopping pot (5.2 million) was attained by Exit the Matrix. Eventually, 100dagar was left with 354k in chips.

The final hand was conducted after a short interval when 100dagar made it certain to try and double up with 5c Qd and moved all his chips into the pot. The influence of bad news increased when Exit the Matrix smashed him with a big hand in As Ks. The board showed 2s Ad Ac 5h 6d and a set of Aces supported Exit the Matrix to grab the title, pot and whopping prize money of INR 2,25,560. On the other hand, 100dagar was rewarded with INR 1,49,296 for his runner-up finish.

After challenging moments during the final round, ‘Exit the Matrix’ finally shipped a title in the final event of SSS Day 2 with admirable prize money!