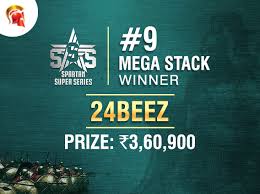 Every Tuesday evenings, the daily featured tournament Mega Stack is organized at Spartan. The tournament typically comes with a guaranteed prize pool of 10 Lakhs. However, for the current Spartan Super Series (SSS), this guaranteed amount is increased by 50%, reaching to INR 15 Lakhs. The SSS Event #9 on Day 2 lasted for 7 hours and finally, ’24beez’ was announced as the winner. He bagged the biggest prize money of the Day 2 action.

Many poker fans may wonder why the prize money is the biggest; the reason is the prize pool prevailed the hiked guarantee amount. Total 308 participants put together INR 18 Lakhs in this tournament that presented a buy-in of INR 4,400. Out of them, 39 players would be rewarded with min-cash of INR 12,420.

The names of popular pros who cashed out from the tournament are Kanishka ‘Wildflower’ Samant (exited at the 25th place) and Chiraag Patel (IOPC title winner from July’s edition). There were several deep runs for Team India, but Patel outlasted the participating players and won his first international title at the APPT in Manila, recently.

The field transformed into the final table and from that to heads-up, due to this, it was down to 24beez and ‘U_R_MY_BANK’ contending for this tournament title and also for the biggest amount of the prize pool. The winner continued the lead with 5.7 million chips while that of U_R_MY_BANK was 3.9 million. The corresponding lead instantly flipped in support of U_R_MY_BANK, a few hands before the heads-up.

This was when a gigantic 2.3 million pot reached U_R_MY_BANK while he mounted an all-in move during his turn and the same was folded by 24beez. It’s not much time that the lead lasted long because, after a few hands, these two players hit two pairs. However, as the game unfolded, the hands of 24beez were the better out of the two and he bagged a pot valued 4.8 million chips. This was essentially not the last phase of the swing fest.

It was revealed that the heads-up play continued for over 50 hands and there were different pots with value in the range of 1 to 2 million. These pots were dealt between the two challengers. Many hands came into the favor of 24beez’s and when the final hand took place, he completed with more than 7 million chips as compared to 1.2 million chips of U_R_MY_BANK. The latter with Jh Th moved all his chips into the pot and 24beez who held an enormous lead made the call with Td 7d. The river was in favor of 24beez on a board of 5s 4d 9s 9c 7c and through the help of his two pairs of Nines and Sevens, the tournament declared him as a winner with a prize money of INR 3,60,900 and the title of SSS Mega Stack. Eventually, U_R_MY_BANK was declared as the runner-up and won a prize money of INR 2,39,940.

The occasion of winning the biggest prize money of SSS Day 2 will support ’24beez’ in his future poker endeavors!